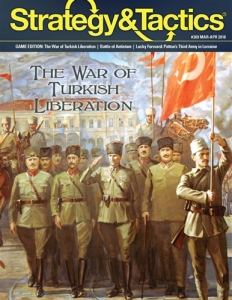 The War of Turkish Liberation begins during the first half of 1920, when the victors of World War I (Greece, France, Italy, and Great Britain) tried to implement the partition of the Ottoman Empire that had been agreed to at the treaty of Sévrés. There are two players in this game:the Revolutionary player and the Imperialist player. The Revolutionary player controls the Bolshevik and Turkish Nationalist armies, and the Imperialist player controls the armies of Greece, Armenia, Azerbaijan and Georgia.