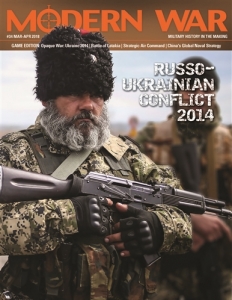 Opaque War: Ukraine 2014 is a simulation of the military conflict between the Ukraine government and the Donbass rebels (the People’s Republic of Donetsk and the People’s Republic of Luhansk). Game play begins in April 2014 when the Ukrainian government launched the so-called Anti-Terrorist Operation (ATO), to assert its control over the rebel provinces. There are two players in the game: The Ukrainian government player and the Donbass Rebel player. The Ukrainian Government player assumes the role of the commander of the Ukrainian Regular Army and the nationalist militias, police, and border guard forces. The Rebel player assumes the role of the commanders of the breakaway republics of Luhansk and Donetsk and (eventually) Russian support units.