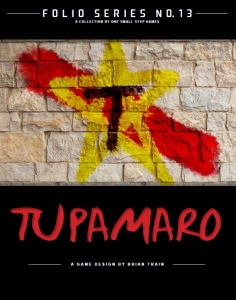 Another COIN entry by designer Brian Train, Tupamaro is a game about the internal war between the Tupamarus and the forces of the Uruguayan State security from 1968 to 1972 fought in Montevideo. The game is an unusual treatment in that because all the action took place inside a single large city, the map is a non-representational 'map of attitudes' of the people of the city of Montevideo, with an abstract troop and time scale. The guerrilla player has many subtle strategies to try while the Government player struggles to train his security forces and keep the people on his side.

Solitaire Suitability: 5 out of 10

Tupamaro was one of the first wargames I designed, back in 1994. It was the first and remains the only game on the urban guerrilla movement of that name that was active in Uruguay during the 1960s and 1970s.

In sitting down to design it, I had first to make a few decisions around the game’s basic parameters:

Time: this scale I left deliberately vague, so a turn can represent anything from a few days to a few months. It’s an old saying that 90% of a war is spent waiting around for the other 10% to happen, but there’s no reason to incorporate that ratio into the game.

Space: All of the action took place inside Montevideo, the capital city where more than half the population of the country lived (about 1.5 million people at the time, about the size of Phoenix, Arizona). Both sides were fighting not for domination of a physical space but for the allegiance of certain social groups - whence the concept of a non-representational map of Social Sector Areas (SSAs) for the game, instead of a map of the actual ground where the action took place.

Finally, the dimension of Action in the game. Tupamaro is a turn-based game, and the heart of each turn is the interactive Operations Phase. A decision cycle is run repeatedly during the Phase, until players run out of resources or prefer not to continue. The Tupamaro player is the one with control at the top of every cycle: he decides whether he or the Government player will conduct the next mission.

The game-quantifiable result of the action in the game is usually the gain or loss of Political Support. This is measured by a Political Support Level (PSL). It represents the level of support, commitment or legitimacy the mass of the civilian population is prepared to give one side or the other. During the game, each player maintains a PSL independently of the other. By showing this in a non-zero-sum fashion, we can model simply a highly polarized and committed society (where both sides would have a high PSL) or one overrun by fatigue, confusion or apathy (where both sides would have a low PSL), or something in between.

I like to present players with a large range of choices, the more agonizing the better. The main challenge and interest of this system lies in the changing combinations of missions a player can concoct to form a successful general strategy. So, each player has a different menu of missions available to them, to take advantage of points of stress or outright fracture in the enemy’s organization, or society at large. I tried to model this in choice of missions available to players in the game:

• The economy. The Tupamaros also organized frequent riots or strikes to interfere with the operation of the economy. This diverted police resources (in the game, the government must react to a riot/strike or suffer a considerable political penalty) and affects the ability of the government to support the counterinsurgency fight through undisturbed taxation.

• Morale of social groups and organizations. I mentioned how positive attitudes on the part of social sectors on the map are helpful to players. There are three governmental organizations in the game as well: the Army, the Police and the Politicians. In the game, the Tupamaros can conduct political kidnapping and Intimidation missions to affect the morale of these organizations, as they did historically. Lowered morale for the Army or Police makes them less efficient. A crisis occurs each time an organization's Morale falls below a certain point: the government player will always lose resources with some additional “cascade” effects – for example in the case of a Police crisis, they might go on strike, making all police units useless for the rest of the turn. Intimidation is a powerful tactic for the Tupamaro player but it is expensive in terms of resources. And if the Tupamaro player causes too many Crises, he will provoke a declaration of Internal War, which backlash will put him at a significant tactical disadvantage.

For his part, the Government player can Build and Train his forces. Training takes time and resources but upgraded troops are more effective and avoid the penalty for using untrained recruits. The government player can divide his security forces between a passive role of Guarding the streets, and an active role of Cordon and Search missions to capture or eliminate insurgents and possibly rescue kidnapped Public Figures. He can also fight a semi-covert campaign of placing Informers and running Intelligence missions to reveal Tupamaro units and eliminate Infiltrators.

No matter what they might have been ideologically, in terms of method the Tupamaros were terrorists. I wanted this game to make several points about terrorism and counterterrorism, through the player’s choice of missions and their varying effects on the game’s dynamics.

• Terrorism is a primary tactic of urban guerrillas, but it is only a tactic. Terrorism cannot make a revolution by itself, but used in conjunction with a campaign of strikes, riots, and political activity aimed at a general uprising, it can make a revolution possible.

• The power of terrorism lies not in the material damage it can cause, but in the psychological “cascade” effect it can have. This is especially so in the urban environment, where there are simply more witnesses and each terrorist action can be vastly amplified and often grossly distorted by modern methods of mass communication.

• The “cascade” effect is nonlinear, but not completely unpredictable. In the game, mission outcomes are usually randomized with dice. There is also a Random Events Phase built into the turn sequence that presents temporary opportunities or obstacles to players.

• The security forces need reliable informers, a coordinated network for sharing and disseminating intelligence, and trained troops. Without these, the government is flailing in the dark.

• The tactical initiative normally lies with the insurgents, but this does not always translate into a tactical advantage. Again, the Government player has the choice of how he will react to the insurgent’s provocations, and with the intelligence and training amenities listed above his reactions will be that much more effective.