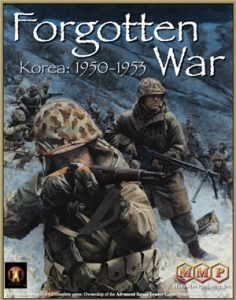 For the first time, an Advanced Squad Leader module steps outside of the traditional World War II era to bring you FORGOTTEN WAR, covering the Korean War of 1950-1953.

O.U.N.C. (Other United Nations Commands), representing forces from such countries as Colombia, Ethiopia, France, Thailand, and Turkey, all of whom contributed to the U.N. effort;

one box and lid

FORGOTTEN WAR is not a complete game. Ownership of the Advanced Squad Leader Game System is required for play.