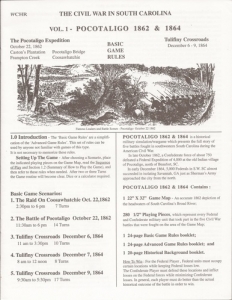 This game presents battles from the War Between The States, located near Hilton Head Island and Beaufort, South Carolina.

The Basic Game is a fast playing simulation of advancing along the narrow roads and through the thick coastal forests and swamps of southwestern South Carolina. The Confederate player must choose the right times to fall back, or risk being overwhelmed by the Yankee aggressor.

The Advanced Rules include Skirmishers, Hidden Movement, Breastworks and Fortifications, Tides and Naval Grounding, and Alternative Federal Landing Sites. Individual cannon types are represented in both field and naval artillery units. Ammunition usage is an important aspect of command decisions. This is a very well-researched wargame.

The Sequence of Play is a variation of the Original GBOCW System, with Fire Combat, including any Defensive and Return Fire, taking place before Charge Combat.

This game is an excellent simulation, and an enjoyable game as well, and was the best gaming effort by the leading historian of these particular engagements.