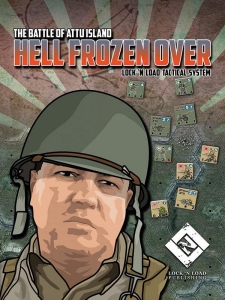 In June of 1942, the Imperial Japanese Army seized the island of Attu in the Aleutian Islands of the United States’ Alaskan Territory. The United States, fearing the Japanese would use this strategic location as a base to control the northern Pacific Ocean’s sea lanes, launched an assault in May of 1943. The 2,500 Japanese soldiers, mostly of the 301st Independent Infantry Battalion, were dug-in in the high mountains to defend against the Americans of the 7th and 32nd Infantry Regiments of the 7th Division. An arduous, nearly three-week campaign fought in brutal Arctic conditions over bleak, rugged mountainous terrain ensued, climaxing in one of the largest Banzai charges of the war.

Hell Frozen Over is an expansion module for Heroes of the Pacific. Play nine scenarios on a unique 22”x34” Map that accurately depicts Attu’s harsh terrain. The terrain varies over eight levels in height and features boot-sticking Muskeg, rock-strewn Rough, precipitous Cliffs and jagged Razorbacks crossing the high peaks of the unforgiving, mountainous landscape. Through fog and unexpected high winds, known to the Aleuts as “Williwaws”, both sides struggle to hold and take ground. Clevesy Pass, Cold Mountain, Point Able, Engineer Hill, the Sarana Valley and Prendergast Ridge are all fought over. The fighting is hex by hex, yard by yard, bullet by bullet, hand to hand; and it won’t end until the last Japanese soldier is vanquished.