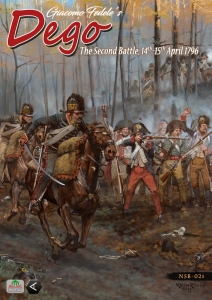 After his victory at Dego, Napoleon decided to hit first the Piedmontese Army but the heroic defense of Colonel Dal Carretto that, retreating in front of the French found his stronghold in the Cosseria Castle, stopped the French western Push for an entire day.

This forced the French to turn on their advance to the east toward Dego, the gate to the Po Valley.

Dego, the second game in the Napoleon Small Battle Series (NSB), offers you a new set of rules that includes new orders and situations to let you recreate the development of new tactics and formations.

Based on activation chits and operative orders, the game system features the different effects of formations on movement, fire and melee, forcing players to change their plans and to adapt their line of battle to respond to the enemy actions. Counters represents single infantry battalions or cavalry regiments and batteries or double companies of skirmisher.

To win, players needs to develop a real battleplan deciding if let move and fight all the available units in a single wave or to activate them a regiment/brigade at the time to use enemy mistakes to divide and eliminate their forces.