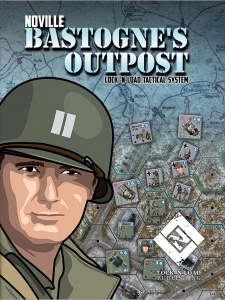 In the bitter cold, on the eve of winter in 1944, the Germans launched a most unlikely offensive through the Ardennes Forest against the Allies, in what came to be known as the Battle of the Bulge. On December 19th and 20th, the small town of Noville, Belgium, to the northeast of Bastogne, was the location of an intense struggle. For the Americans of Team Desobry, stragglers from a handful of shattered formations, including paratroopers from the 101st Airborne, Noville was the ground fought over in all conditions, at night, in fog, down the barrel of a rifle and hand to hand. It was an onslaught. For two days, Desobry’s patchwork quilt of men gave their all against the might of the German 2nd Panzer Division and 26th Volksgrenadiers trying to encircle and crush them.

Noville, Bastogne’s Outpost is an expansion game for Lock ‘n Load Tactical’s Heroes of Normandy. The battles are fought on a large historically accurate map of Noville and its vital surrounding high ground and approaching roads. Play the game’s scenarios individually or sequentially as a campaign, adding a few modifications for carry-over units and your own personal Hero, whose abilities continue to increase the longer he survives. With special rules for fog and bogging down in the mud, new support weapons such as sticky bombs, and a host of new vehicles, including the American M4A3E8 “Easy Eight” Sherman tank, M18 Hellcat Tank Destroyers, M3A2 Half-tracks, M8 Armored Cars, and the German SdKfz 251/9 Stummel and Jagdpanther V, the battlefield has never been as savage, as fierce. Every impulse counts.

Requirements: You must own Heroes of Normandy to play this game.