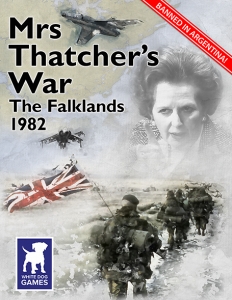 ‘The eyes of the world are now focused on the Falkland Islands. Others are watching anxiously to see whether brute force or the rule of law will triumph. Wherever naked aggression occurs it must be overcome. The cost now, however high, must be set against the cost we would one day have to pay if this principle went by default. That is why, through diplomatic, economic and, if necessary, through military means, we shall persevere until freedom and democracy are restored to the people of the Falkland Islands.’ – Margaret Thatcher, 14 April 1982.

Not designed as a detailed simulation, this fun and challenging game illustrates the general strategic course of the 1982 Falklands War between Britain and Argentina, and highlights important historical themes.

It is two games in one: a naval/air game (whose mechanics are based on the author's "Don't Tread On Me" system, but using ships and aircraft instead of armies!) in which the British Player fights against the game system's Argentine "A.I." to establish control of the skies; and a ground game (modeled after the game system featured in the author's "Mound Builders" and "The First Jihad") in which the British Player takes advantage of his air superiority to fight and 'yomp' his ground troops across East Falkland to final victory -- or defeat -- in the hills around Stanley.

The game features all the historical chrome for which this design team is so well known, including Exocet missiles, Falkland Islander civilian resistance, diplomatic shuttles, covert Soviet aid, SAS guerilla missions, Chilean intervention, US assistance, the Gurkhas, helicopters, "ace" pilots, and even the Pope!