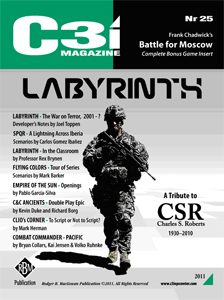 Scenario 113 – Taking the Knoll by Kai Jensen and Bryan Collars. This scenario is set in the closing stages of the New Guinea campaign and pits Australians against weary Japanese left on New Guinea.

Scenario 114 – First Joust with Galahad by Volko Ruhnke. This scenario moves the action to Northern Burma and features US deep-penetration forces against aggressive and resourceful Japanese.

By John A Foley

To Script or Not to Script, that is the question?

Successful wargames present players with challenging decisions, while creating a compelling historical narrative. This column will focus on the pros and cons of card scripting in Card Driven Games.

Don’t Give Up the Ship!

A tour of theFlying Colors Series and Serpents of the Seas

We now take you on a behind-the-scenes tour of the game’s development in an insightful article by the game’s developer. New players will appreciate the developer’s tips. Novices and veteran players alike will enjoy experimenting with two NEW Optional Rules for the game – including two new game pieces.

But that’s not all. This issue also includes an action-packed Game Report. Designer and developer go head-to-head in a tense game that was decided on the final die roll of the final card-play of the game. Catch the white-knuckle excitement and game-produced narrative that reads as though it was ripped from yesterday’s headlines.

This analysis article sets out some important strategic principles that aim at improving Union play in the middlegame (1862) when the Union is most vulnerable to Confederate (CSA) invasions. It will be assumed that the CSA is going to pursue an aggressive Eastern theater strategy as developed and refined by the top World Boardgaming Championship (WBC) tournament players as epitomized by James Pei, WBC champion.

The Battle of Adrianople, 378, is one of the more decisive battles of the late empire, sometimes mistakenly called the “beginning of the end of the Empire.”

While its effects are well known, its details are surprisingly vague. We can be confident that the battle started before the Romans had their army entirely ready, due to an impatient subordinate commander, but reports vary on whether this happened on the right or the left flank! Perhaps the details are murky because so many of the Roman leaders died, including the emperor himself. What we do know is that the Romans blundered their way into the fight.

The Strategic Choices for both sides in Clash of Giants

Clash Of Giants: From Tannenberg to Gettysburg

Japan, New Guinea and the Solomons in Empire of the Sun Openings

Special C3i Bonus Game in this Issue: Battle for Moscow, 1941

An updated version of this WWII Eastern Front game depicting Operation Typhoon and the drive on Moscow in 1941. A two-player game with updated mapsheet, counters, player aids and rules. Units are at German corps or Russian Army level. Each game turn represents from 1-to-2 weeks. Developed by Alan Emrich and Lance McMillan. Art and Graphics by Mark Simonitch and Rodger B. MacGowan.