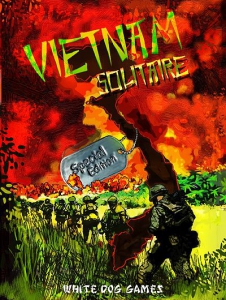 Vietnam Solitaire Special Edition is an expanded edition of the original Vietnam Solitaire that contains both the original game (with all new artwork) and a reimplementation by Steve Kling with expanded rules, new scenarios, and new counters. While primarily a solitaire game, the special edition also contains optional two player rules.

Victory is determined by controlling at least three regions of Vietnam for a majority of the game. Unlike in the original game, the eventual victory of the North Vietnamese is not a foregone conclusion.

The Special Edition contains new types of units, a greater variety of of combat points, and two new scenarios - "Tet 1968" and "Fall of South Vietnam".

All Game Charts and Tables Located On Game Board