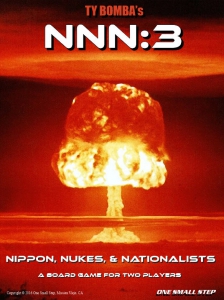 This game extends the narrative begun in NATO, Nukes & Nazis: The War in France & Russia to the other main theater of operations of this war: East Asia. It can be played alone or combined with the play of the two-map scenario in the parent game. Either way, it will provide a complete theater-commander experience.

The initiating change to history behind this game is as follows. Early in the spring of 1943, one of the historically failed assassination plots attempted against Hitler during that period actually succeeded. In short, that allowed the German high command to go over to a fully rationalized defense at the strategic, operational and tactical levels. Long story short: the Third Reich survived WW2 in truncated form.

The new rulers in Berlin soon thereafter set in place their own "Warsaw Pact," an alliance among Germany, the Baltic republics, Belarus, Ukraine and the Balkan countries north of Greece. The Allies reacted by creating NATO, which rump-Russia eagerly joined.

By 1980, the same kind of rot that afflicted the USSR in our timeline began to set in within the Third Reich. Here, though, instead of initiating a German version of Perestroika and Glasnost, those ruling in Berlin decided to roll the dice on one all-out and final war for global domination.

In the Far East, Chiang Kai Shek and his Nationalists, aided by Germany, triumphed over the Chinese communists by 1950. It was only the threat of joint US-Russian intervention that kept Chiang's armies from occupying and annexing the Korean peninsula shortly thereafter. Following that check, Chiang applied for, and was granted, China's membership in the Warsaw Pact. As a counterbalance, the US oversaw the rearming of Japan, and that nation was admitted to NATO in 1953.

Each turn of play in NNN3 equals a week of real time. Each hexagon on both maps represents 75 miles (121.5 km) from side to opposite side.

The system is based around the central idea that large First World armies (as well as those from elsewhere that have been trained and equipped to try to perform like First World armies) almost always begin major wars seemingly well prepared. Unfortunately for those in their front-line units, both the training and equipment usually only make them ready for the previous war, not the one they're about to fight. Beyond that, the initial period of such wars is characterized by only a partially abandoned peacetime psychology among the officers and enlisted. That is, no one as yet appreciates what it means operatively to be in an all-out war. All that comes together to give overall performance high-risk, volatile and fragile qualities: no one as yet really knows what's actually possible or wise to try to accomplish. Seemingly powerful units therefore easily become "disrupted" -â€“ especially as gauged in relation to similar units' performances later, after everyone's been thoroughly schooled in the art of war as it exists in the present.

The system therefore doesn't play--when looked at on a step by step basis--in a way common to division-level simulations. The whole thing has a "Go" like quality to it. The commander will succeed best who--rather than reacting to or launching operations opportunistically one at a time--plans his campaign and then campaigns on that plan. Of course, we all know it's also true "no plan survives first contact with the enemy."

So, even as you plan, you must do so while leaving within your overall scheme at least some capacity for opportunism. Strategy is not simple; it is complex. The game is designed for two-player play, but solitaire play can be easily 'fudged.' Playing time (when played separately from NNN2) is about four hours.