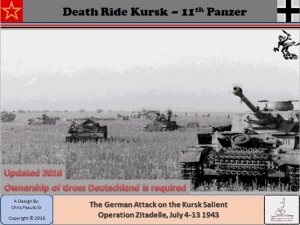 11 th Panzer was not the largest German division involved in the battle. 11 th Panzer’s mission was to be the right flank guard for the XLVIII PzK. It was also responsible to maintain contact with the IISS PzK. Elements of the 167ID were assigned to help maintain contact with the IISS PzK. The Division has components of all arms and is an average strength panzer division at this time in the war. It is organized the same as most panzer divisions. It has a Panzer Regiment with 2 Panzer Battalions, 2 Panzer Grenadier Regiments each with 2 Infantry Battalions, a Panzer Artillery Regiment with 3 Battalions, a Reconnaissance Battalion, PanzerJager Battalion, Anti-Aircraft Battalion, and Pionere Battalion. YOU have the ability to task organize the Division to make each Battalion a more potent combat weapon by cross-attaching infantry to the armor and vice versa, or even engineers or recon to these Battalions.

(2) Map Sections of the Pena River Area of Operations