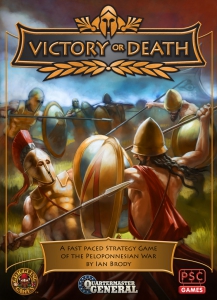 Victory or Death: The Peloponnesian War, the next game in the Quartermaster General Series, is a card driven/hand management/area control eurogame/wargame for 2 to 4 players playing on two teams, and takes about 90 minutes to two hours to play. On one side are the Athenians and the Delian League, the Demos team; against them, the Oligarchs of Sparta and Corinth are teamed.

The Peloponnesian War is a great setting for a historical game, having two evenly matched factions with very differing capabilities. Athens (and the Delian League, including Corcyra) commanded the seas, and relied on trade to feed their masses. On land, the Spartan phalanx was virtually unbeatable, as all adult Spartan male citizens were professional soldiers

Players of Quartermaster General will find most of the concepts familiar. Since the game has a smaller maximum player count, the amount of activity during a turn has been slightly increased.For example, after the Play step there is a Planning step, when you can place a Prepare card on the table. Prepare cards in Victory or Death work a lot like Response Cards in Quartermaster General, but have a much broader scope of application. Many Prepare cards are used during the Strategy step, which is at the beginning of a player's turn. Much of the game play is structured around putting together effective combinations of played cards and prepared cards.