In the Trenches: Rising Sun 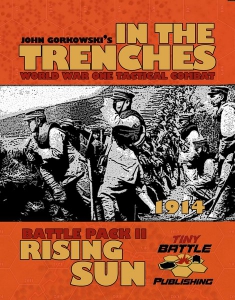 Rising Sun is the second battle pack for In the Trenches, and the focus is on the often overlooked role played by Japan in The Great War. There are three historical scenarios pitting Japanese infantry and cavalry, fighting alongside the Brits, against the Germans. There is also a hypothetical scenario that places the Germans on the offensive.