In the Trenches: Doughboys 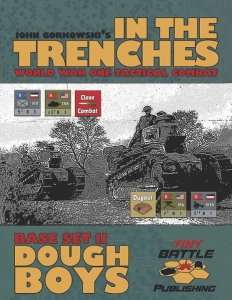 "...And we're not coming back Until its over Over there."

Our second Base Set is a grab-bag of great all-new scenarios. First, the green Americans find themselves in a desperate battle with German stormtroopers. Then, the US 327th Tank Battalion rolls into action at Bois de Sonnard. And finally, because you can never have enough tanks, Mark H. Walker gives us an alt-history engagement to round out the set.

1 rulebook to rifle through

A non-military issue Ziploc bag to billet your troops

You’ll need to requisition 2 dice from your divisional quartermaster