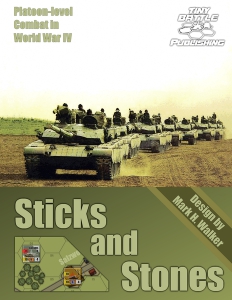 Sticks & Stones imagines a post-nuclear 1987 unlike anything you've seen before. Seven days after a limited nuclear exchange has irradiated most of Russia and the United States, Soviets roll across the West German border, eager to claim precious non-irradiated ground for the Politburo. American armor stationed at the border rushes forward to meet them, and World War Four begins, fought with much more than sticks and stones.

This platoon-level game comes packed with four scenarios that can be played on a single map. The streamlined, to-the-point design philosophy on which the esteemed Mr. Walker has built his name is in full evidence here, with cinematic action and tight, balanced scenarios that often come down to the nail-biting last die-roll of the final turn.

Easy rules and scenarios, so you can start playing before WWV.

A spiffy Ziploc bag for containment.

You'll need to take two six-sided dice with you to the fallout shelter.