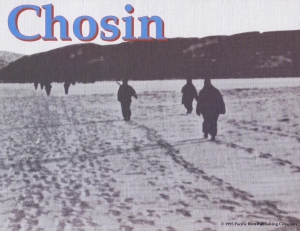 On June 15, 1950, the North Korean Army invaded South Korea. The United Nations' counterattack began on September 15th when the United States' XCorps landed at Inchon. By late November, the Communist forces were pushed north almost all the way to China. The American forces were promised they would be home for Christmas. On November 27th, 100,000 Chinese infantry launched an offensive against 28,500 American Marines and Army troops in the sub-zero cold northwest of the Koto-Ri Plateau.

In 10 days, half the Americans were dead, wounded, or frost-bitten — 37,500 Chinese soldiers shared similar fates — and a new name for valor under impossible conditions had been carved in the Annals of Warfare: CHOSIN.

With an innovative battalion-company-platoon scale, CHOSIN presents both players with a dynamic combat situation where line-of-sight, mutual support, and tactical initiative play key roles in determining the outcome of battle.

22 by 34 inch map of the Chosin Reservoir area