Accueil > Wargames > Clash of Arms > The Army of the Heartland

The Army of the Heartland 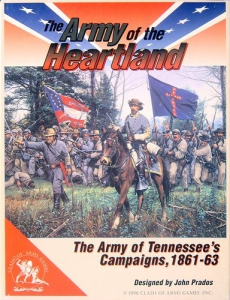 The Army of the Heartland is a strategic-operational simulation of the rebel Army of Tennessee's campaigns during the Civil War. Created by award-winning designer John Prados, and using the same scale and game system as his earlier Campaigns of Robert E. Lee, this game focuses on the critical, but largely ignored actions in Kentucky, Tennessee and northern Georgia between 1861 and 1863. The game includes 560 die-cut counters and two stunning maps depicting the 'heartland.' You also get two army display sheets, a 32 page rulebook with 8 pages of charts and tables and 9 scenarios covering the major engagements. A campaign game scenario covering the whole crucial year of 1863 is also included to allow players to explore the options available to both sides."

Rulebook with Scenarios, Historical Analysis, plus Charts and Tables

Nine scenarios plus an 1863 Campaign scenario

Over 90 Leaders, each individually rated for his Initiative, Administrative, and Tactical Abilities