Accueil > Wargames > Clash of Arms > The 6 Days of Glory (boxless)

The 6 Days of Glory (boxless) 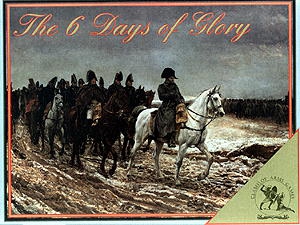 Napoleon in retreat, full. Napoleon was defeated in the battle of Leipzig the previous year. He was determined to make one last stand on the road to Paris. Facing coalition between Prussian under Blucher and Russian under Sacken, Napoleon caught them and was about to crush them in decisive battles before Paris in 6 days of February, 1814.

The Six Days of Glory is an operational Napoleonic game. 3 short scenarios are included, covering the campaigns in three separate battles at three cities along the road to Paris: Champaubert (9~10 Feb); Montmirail (11~12 Feb) and Vauchamps (13~14 Feb), each playable in less than 1 ½ hours. A campaign scenario linking all three (9~14 Feb) battles from the beginning to the end can be completed in less than 3 hours.