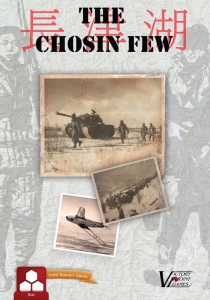 On October 25, 1950, with General Douglas MacArthur's United Nations forces closing in on what would have otherwise been a quick victorious end to the Korean War, Communist Chinese forces began pouring across the border. In northeastern Korea, the US X Corps, led by Major General Ned Almond, was strung out with its units unable to support each other. Those units near the Chosin (Changjin) Reservoir included the 1st Marine Division and elements of the 7th Infantry Division.

You control the United Nations X-Corps, which primarily consisted of US Marine and Army forces. Particularly the 1st Marine Division and 7th Infantry Division.

The game’s AI system will control the Chinese forces as they come pouring over the border into Korea and surround you.

• One End of Order card

• One sheet of 11 counters and 2 standees