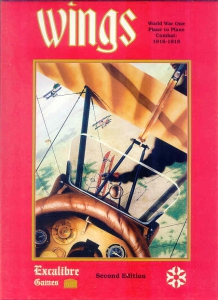 "A game of plane to plane combat in World War I"

There is plenty of goodies in the box, including three geomorphic map boards, plenty of thick counters, and as much rules as you can stomach. Luckily, you can select both your level of realism (i.e. complexity: ranging from the Mass Game to the Duel Game) and the length of the scenario (30 min to 4 hours), so the game is pretty flexible in this regard.

(what follows is abstracted from the ZOCO Historical Simulations Archive review)

Wings is a simultaneous movement job and can get pretty complex. This is traditional heavy duty boardgaming, not as complex as Advanced Squad Leader but harder than Wooden Ships & Iron Men and only workable with very few planes per player. Thankfully the rules do not all have to be used and Wings works pretty well with basic rules, with some of the advanced and optionals as required. The advanced rules are supposed to be used as a block but consist largely of tricky maneuvers as opposed to the turns and slides of the basic rules. A simpler fleet-style game using plenty of planes is also provided. The scenarios provided include the legendary Wings 6 hex Zeppelin counter, boat targets, bombing, trench-strafing and photo runs.

The basic problem of WWI air combat as presented in Wings is that the planes are not very good, not very fast, grossly underpowered, turn poorly and chances are that when they get a shot off they tend to miss. As a result, there is a lot of manoeuvring (more than the columns provided on the plotting pad) and relatively little damage (it could have been jotted down separately instead of occupying part of the pad). 3-D is simulated through altitude levels (0 to the 800s --although many planes will not get that high); planes go faster when diving and lose speed when climbing. Go too slow and you will stall and spin downwards until you can pick up enough speed or crash.

Simultaneous movement games often involve a lot of ESP because it is hard to tell where the opposition is going. Things are not so bad in Wings because planes have bank attitudes showing which way they lean, like in Blue Max. Turning, manoeuvring and climbing restrictions are such that you can narrow down the other plane's intent by carefully paying attention to its banking attitude. Likewise, firing arcs are restricted, and the penalties for firing in a turn and the like are pretty steep, so naturally a plane that thinks it has a good shot will keep pretty straight and level, not too hard to out-manoeuvre. The general problem of planes chasing each other over an endless sky and having limited powers of turning and climbing means they will not often be in each other's guns. Having missed, it will take some time for the planes to all move around back into suitable combat positions. The game is considerably improved by having more than 1 plane on each side, thus ameliorating the chance of someone being able to fire at someone else.

Gunnery is based on 2D6 rolled as 11 to 66 (a frequent mechanism in Yaquinto games). Results will rarely destroy a target on 1 hit but affect some part of the plane. When not hitting Structure, your hits will likely reduce the limited performance of the planes. Some hits can reduce the power rating of planes. If the target only has 1

power to spend each turn and it loses that, then it is in trouble --it can no longer climb or turn without losing speed and will be forced to dive to get anywhere. It is thus more sensible to fly off when suitably blooded rather than prolonging the game as planes slowly drag themselves back into combat.

Solitaire gaming works quite well because the rules severely limit what a plane can do so the guessing is kept low. Play actually improves with more players as this generates more opportunities for mayhem. 50 plane types are provided although Yaquinto never published Wings II so other planes are referred to in the force tables that have no details (although it just may be possible to figure out those "missing" planes' characteristics from their counterparts in Blue Max and Knights of the Air). The planes are rated differently, but unfortunately performance varies with altitude so you need to check the plane reference card frequently --whilst the gun data is on the opposite side of the card.