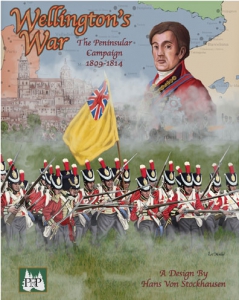 Combat involves dice rolling for hits (No CRT or Battle board needed). The Supply and logistic rules are meant to model the Peninsular War adage that: "In Spain large armies starve, and small ones get beaten". Winter attrition in the wrong areas can be brutal. Control of areas is key to victory and the French player in particular will contend with conflicting needs of garrisoning key areas while maintaining a sufficiently strong field force.

The map covers Spain, Portugal, and southern France at about 35 miles to the hex. Depicted are the various provinces (rated for political and supply value), the major rivers, mountain ranges, and the key fortresses and towns. Each turn represents 6 months of real time (12 turns in game) and is broken down into Event, Operations, and Administrative phases.

A set of 30 event cards allows for random events, historical chrome, and political background. They also help regulate the various nation's force levels in the game. A sampling includes: "The Convention of Cintra", "Supreme Junta", "The Emperor Strikes Back", and "Russian". War. The game also includes 30 operations cards.

The game has a 12 turn Campaign game scenario, a five turn short game scenario, and a set of optional rules that provide more chrome or can be used to favor one side or the other.