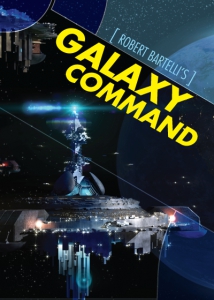 In GALAXY COMMAND, 1 to 4 players take the role of a galaxy commander. Each tries to maintain a delicate balance of resources, military power, and technological achievements as they explore the galaxy. Game play is fast and fun with varied decisions to be made by each player during their missions.

In each game of Galaxy Command there are near and far systems that must be overcome in order to bring in new resources and wealth. Near systems must be explored before attempting to reach far systems. Some far systems require key technology to be reached with any chance of success. Near systems provide resources that can build your military strength and develop technologies allowing you to overcome challenges as you go deeper into space.

During a turn players reveal a system card (starting with near systems) on their mission path and try to overcome its obstacles. Next they collect wealth and resources and build military strength and technology. And finally a random event card is drawn that may affect one or all players in the game. The event cards are also the timer on the game. When the event cards run out the game is over. The Galaxy Command (all players) saves or fails in its mission by reaching enough far systems to sustain its empire. Each Galaxy Commander (individual player), provided the empire is saved, can be the best among peers by his contribution (score) to the overall mission success.

No two games will play the same as the systems you get, and the decisions you make will change game to game.The event cards affect different players during each game.The game plays in 15 to 45 minutes depending on the number of players and how quick they play.The game is playable for ages 8 to 800 (if your from planet Cirius…).

Originally published by Robert as a print and play solitaire gamewith 19 cards. In this version we have taken the original game, added a multiplayer element by expanding the deck to 54 cards, new artwork, planets, and challenges but keeping the clean mechanics in place. The game was well received as it was and now we have made it playable from 1 to 4 players yet still keeping it playable in under 45 minutes. Here are some reviews from boardgamegeek.com on Robert’s original game:

From Andreas Kaiser at Board Game Geek:

“Fantastic gameplay! Easy rules, great game! Awesome artwork! No matter where it comes from it rocks. I want more. More planets, more events, more of everything!”

From G. Allen at Board Game Geek:

I also like that a card gets ‘discovered’ before it can be ‘colonized’ and become part of my empire. The fact that cards make up the empire, I can put them anywhere on the table and ‘design’ my empire. Galaxy’s Edge, you’re on the edge of the table, every time.

And the interplay with the resources is great. Cards grant them to me, duh and duh, but they can be manipulated with the Interspecies Commerce. Great idea.

I want to fill my table up with my empire. More cards! Planets, nebulas, black holes, energy fields…there is virtually no limit.”

“What the game is about”

“The game is about discovering deep space and conquering new systems.

But I found the real pleasure wasn’t in the points you score or the feel of being a successful conqueror when things work out well. No, the pleasure is in the system cards. They show unknown planets and stars, taking your imagination millions of light-years further than usual. It’s so fascinating to spread those beautiful cards in front of you, whether they show the friendly (conquered) systems of your growing empire or the resisting systems you’ll try and conquer later again. Poetry, I tell you.”

“There are 2 cards decks and a player mat showing information concerning the development of your growing civilisation.

A deck shows systems to discover and conquer. They will bring you ressources and/or victory points.

You always use the same deck when you play so even if you know the game well you don’t know when you’re gonna discover this or that system.

Well you know you’ll only be able to discover the 3 “distant systems” later in the game, but no big deal here.

The 2nd deck is about events occuring while you expand your empire.

Interestingly, some cards won’t be used (1 in the 1st half of the game and 2 in the 2nd half) so you won’t necessarily know whether you’re gonna have to face revolts, invasions or such.

This will bring surprises and this is good.

The 2nd deck is also the clock of the game. When you’ve been through it twice, the game ends and you score points.

Then you can see how well you fared, mostly by comparing with previous games.

The player mat allows you to keep track of your ressources, military strength and the most important “Technology Upgrade Chart”.

Technologies will help you develop your empire and fend off threats.

I was really surprised (and pleased because I find it daring) to find concepts like “Robot Workers” that will soften the economical damages of strikes (who cares about unhappy workers anyway?) or even the “Hyper Television” helping you to tame revolts (really? TV can make people sheepish?).

Poetry with a pinch of sociology… How often do you play games like that?”

“My conclusions: Please give me more”

In our game you get a boxed version with 4 player mats for home base and 4 player mats for technology, dice, wooden cubes in 4 colors, and the Galaxy Command 54 card deck printed on high quality card materials with a linen finish, that add more planets, systems, hazards, events, etc.