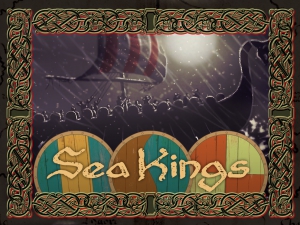 We tell stories through our games. And we want to tell the fascinating story of the Vikings. From Scandinavia they put to sea in long boats and discovered America and new places. They traded in the Mediterranean, the Middle East and exotic locations. They settled France, Russia, England and many other lands. They raided everywhere. Why?

Because they were restless, adventurous people seeking land, wealth and fame to better themselves. Maybe even become a king.

Dr. Lew Pulsiper, designer of the award winning and best selling game Britannia, has designed an easy, fun and fast playing game that tells the Viking story elegantly to us through immersive game play. We captain a long boat and travel the uncharted misty, mysterious seas to stake our claim.

What is the Game About:

Land, Wealth and Fame. This is what inspired Vikings to travel far from home. Fighting dangerous seas, foes and each other. They would go anywhere, anytime and in any weather.

The Viking leaders of these expeditions were called Sea Kings because of their skills in traveling uncharted waters to destinations few knew. And they wanted to be King, back in their home lands. To fulfill their ambitions, they raided, traded, and settled far away lands to attract followers in their quest to become King. And some succeeded. You are one of the Viking leaders seeking fortune in the unknown with your long boat and crew. Do you have what it takes to be a great Sea King by making new discoveries, settling hostile lands, crafty trading, and raiding with the fierceness of a Norseman? If so, seek the throne and make it yours.