Blitzkrieg in the South 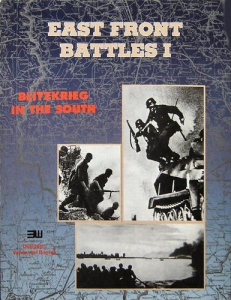 Blitzkrieg in the South is the first in the East Front Battles series, a series which will cover the whole of the Russo-German front in World War II.

Ground Scale is 5 miles to the hex, turns represent 2 days of real time, units represent division, brigades, regiments, or battalions. The game covers the Axis assault on the south-west Soviet Union, which began with the attack by Army Group South with 41 divisions (plus allied divisions) against a Soviet force of 60 divisions. The game concludes in mid-August 1941, at which time, historically, 20 Soviet divions surrendered in the "Uman Encirclement."

The game contains a wealth of different unit types - including bridging units, motorcycle infantry, an armored train, a Soviet river flotilla, combat engineers, rocket artillery, anti-aricraft units, et., etc. - as well as the more standard armored, mechanized, and infantry units. Supply, weather, and terrain all play their part, as do fortifications, strongpoints (these can be built each turn), air power, artillery, reinforcements and replacements, headquarters units, and reserves. The game sequence includes "reaction movement" by units in reserve status, as well as separate motorized movement phases. A particularly eleqant piece of design has the Axis motorized movement following standard movement and combat - thus facilitating armored breakthrough; for the Soviets the order is reversed, leading to poorer coordination between tanks and infantry...

There are 4 scenarios - The Siege of Kiev is an introductory scenario lasting 7 turns, and using only Map B. Rundstedt Attacks depicts the German assault on perhaps the strongest portion of the Soviet frontier; it last 5 turns and uses only Map A. Secenario 3, "Optional Deployment," is a variant of #2. The Campaign Game lasts 27 turns and uses all 3 maps. Victory is judged both in terms of combat losses, and the Axis capture of key geographical objectives.

Historically accurate, fast paced, and playable - Blitzkrieg in the South is a worthy first entry in what will surely become the definitive East Front Series.