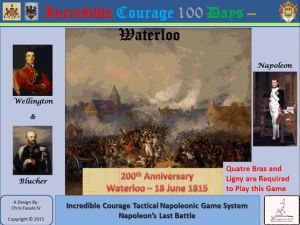 Incredible Courage 100 Days – Waterloo is the crowning game in the set that explores Napoleon’s 100 Days campaign that ended his reign and finished his aspirations as emperor of France. Both Quatre Bras and Ligny are required to play this game.

This game features the final map artwork of Rick Barber.

There are a number of interesting options for inclusion into scenarios in this game.