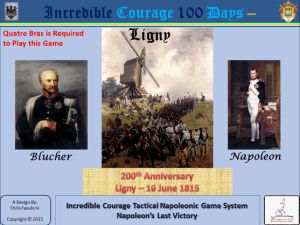 Incredible Courage 100 Days – Ligny is the second installment in a 4 game set that explores Napoleon’s 100 Days campaign that ended his reign and finished his aspirations as emperor of France. This was Napoleon’s Last Victory and he managed it against an enemy force that was larger than his own. The best part of this game is that the French Imperial Guard is located at this battle. Incredible Courage 100 Days – Quatre Bras is required to play this game.

There are 7 scenarios included in this game and 3 of them are on the small side in terms of unit density. These scenarios include "The Battle of Ligny", "The Battle for the Amand’s", "The Fight for St Amand", "The Battle for Ligny", "The Guard Assault on Ligny", "Pinning the III Korps", and "Boignee". "The Battle of Ligny" scenario takes you into the fight for the entire battle. With all its intricate details and nuances that show how the Prussians kept feeding the II Korps Reserves into the I Korps battle for the Amand’s, and the battle for the town of Ligny proper. In "The Battle for the Amand’s" both players will be faced with how to take or hold a series of villages that are crawling with Prussians. The tight terrain makes the fight extremely hard and yet the French force more and more of the Prussian II Korps reserves to be moved to this area. A smaller scenario that focuses on this area is "The Fight for St Amand" which has one French division making its attack and seeing the Prussians respond. In "The Battle for Ligny" the French are assigned the unenviable task of pushing a brigade of Prussians out of the town. In "The Guard Assault on Ligny" the French player is making the final attack of the day with the Imperial Guard. This is their last success. "Pinning the III Korps" is the situation on the French right flank and holding the Prussian III Korps in place as the other forces fight the main battle. The last scenario is a hypothetical. In "Boignee" the Prussian player is forced to make an attack on the French right and see if he can change the course of the battle by making Napoleon react to that.

There are a couple of interesting options for inclusion into scenarios in this game.

This game features the final map artwork of Rick Barber. The map for this Ligny game can be connected to the maps for the Quatre Bras battlefield. Together they make a clean, connected, battle space that will leave you with your jaw hanging open as you see just how close to the Ligny battlefield D’Erlon was and how easily he could have made an impact on either battle had he been able to march to one place or the other undisturbed.