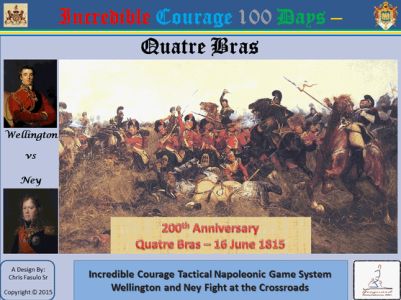 This is a great game, with plenty of detail, of the critical Battle of Quatre Bras fought between Marshall Ney and the Duke of Wellington on 16 June 1815. The battle is an excellent example of a Meeting Engagement, which will provide you the ability to easily alter the flow of the battle, and its tempo. The French II Corps, reinforced with the Light Cavalry of the Imperial Guard, is ordered to take the crossroads and send some troops to the east to help Napoleon, who is fighting the Prussians. This game will smoothly connect to the Ligny battlefield maps when the Ligny game is released. This game contains the Order of Battle charts, and supporting charts, for the entire 4 game set.

The Battle of Quatre Bras - for those of you who want to play the entire event.

15 June 1815 - for those who want a really small scenario that plays quickly. The French Lancers of the Imperial Guard attempt to outmaneuver the small Dutch/Nassau force holding just north of Frasnes and take the crossroads in a quick battle.

Counter-Attack at Thyle - for those who want a really small scenario that plays quickly. The French must take the town of Thyle and the British must hold it. Counter density is very low.

Hooves of Destruction - where the French Cuirassiers and Lancers of Pire's 2nd Cavalry Division manage to catch a British Battalion unprepared for a cavalry charge and the unthinkable happens.

The Guard Attacks - the British Guard has popped out of the Bois de Bossu and is hitting the French to push them south. Their over-zealous pursuit puts them in a bad position when the French cavalry again begins some fine charges.