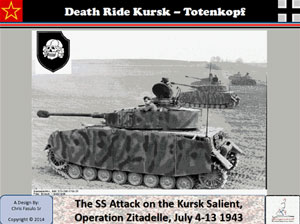 This game has an updated set of maps that are designed by Rick Barber and his features have changed the use of the map in maneuver completely. The maps for the existing games are also being updated. The map update project alone is a very serious project.

The game has the same mechanics as Death Ride Kursk - Gross Deutschland. Units are modeled at the Platoon (German) and Company (Red Army) level. The Command and Control Enhancement provides Company sized counters for the Germans. Units have Secondary and Primary Weapons and can conduct fire and assault combat. The Sequence of Play allows a good open fluid game turn with both sides having plenty of decsions to make and players able to shape the battlefield to meet their plans.

Rule Supplement for the Totenkopf game

More Charts and Tables than can be listed here, but include

Duplicate Combat Results and Firepower charts for both players