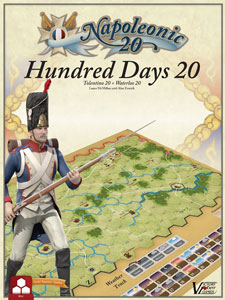 Jack Gill's Tolentino 20 focuses on battle of 2 and 3 May 1815 which occurred in central Italy during the period of the "Hundred Days" of Napoleon’s brief restoration to the French throne. Murat’s early gains were soon forfeit against the two advancing Austrian corps, but these two corps become separated by the Apennine Mountains. Like Napoleon’s Waterloo campaign, Murat hoped to defeat each corps in turn before they could reunite. One player commands the Neapolitan army under King Joachim Murat; the other player commands the Austrian army under Feldmarschall-Leutnant Freidrich Baron Bianchi.

Waterloo 20, 3rd Edition from Joseph Miranda is a game based on the Waterloo campaign of 15-18 June 1815. One player commands the French army, taking the role of the returning Emperor Napoleon. The other player assumes both the roles of Wellington for the Anglo-Dutch forces, and Blücher for the Prussian forces, respectively.

Two months after returning to France, Napoleon had an army of 280,000 men and was mobilizing half as many again for the next two months, but he was set upon by Allied coalition armies of nearly 1,000,000 soldiers who were preparing to move against France. The British (110,000 men) and Prussians (120,000 men) were closest, in Belgium, and Napoleon struck first before their numbers could be combined against him. With speed and surprise, he invaded Belgium with fully 125,000 men in a bid to defeat each of these armies in turn before they could unite.