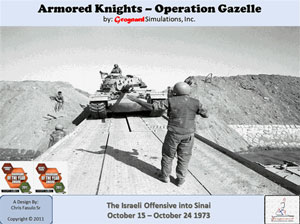 Israel's most daring battle to cross the Suez Canal. General Sharon's Ugda (an Israeli Division) leads the offensive into Egypt and in a hard fought set of small fights ends up cutting off the Egyptian 3rd Army.

This game won the Bronze Award from Wargamer.com for 2011. This offering, Operation Gazelle, is focused on the Israeli attack to cross the Suez Canal and force the Egyptians to retreat back into Egypt in the 1973 Yom Kippur War.

Armored Knights, Operation Gazelle, the battle of the Israeli offensive to cross the Suez Canal and invade Africa and cut off the Egyptian Army elements that were on the east side of the canal. This game focuses on combat at the battalion level on a scale that makes representing large battles real fun. It will also have its own innovative and unique way to handle the combat mutlipliers for engineers, anti-tank, intelligence, and recon elements. The players will find this does not always work the way they want and the support troops sometimes fail to do the mission they are assigned to do. They might even have a detrimental effect. Both players will be challenged from the start of the battle. The Egyptians will find that counter-attacking is very difficult as the higher command did not beleive what they were told about the Israeli positions on the west bank of the Suez Canal. The Israelis will find that getting across the canal is one thing, holding the crossing is another, and spreading out across the west bank is another still. Players will be rewarded for mixing the different combat support elements to enhance each attack or defense. As happened during the battle the Israelis will find it very hard to attack Egyptian infantry alone or against their anti-tank screens. Six scenarios are available to play the whole battle through the cutting off of the Egyptian 3rd Army, or just some important parts dealing with the attacks on Ismailia or Suez City.