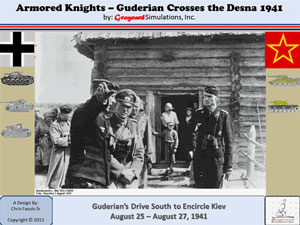 With the success at Smolensk behind them the German High Command changes the plan in the east to take Kiev, instead of Moscow, first. Guderian's 2nd Panzer Group has the task.

This is a stand alone game and an excellent introduction to the Armored Knights game system. The game has one 22x34 map equivalent, one sheet of 216 counters and markers, and a some small scenarios. Three scenarios detail the actions of the 3 days of battle. The first scenario is small and short. It's a race to the bridge in the German attempt to capture it in a coup de main. The second scenario is the full 3 day battle. The last scenario is the German bridgehead forces trying to hang on and expand the lodgement.

Armored Knights is about battalion level combat. This offering, Guderian Crosses the Desna 1941, is focused on the German attack to start the great encirclement of Kiev.

This battle starts on 25 August 1941, just after General Guderian goes to visit Hitler to convince him to allow the German Army to attack Moscow next. Hitler decides that he wants to try and capture Kiev next. He is mesmerized by the rich farmland and industry there. Hitler manages to convince Guderian that Kiev is a better target. When Guderian gets back he sets his troops in motion. Their first test is to capture a major highway bridge over the Desna at Novgorod-Seversky. His advanced elements fail to take the bridge in a coup-de-main on the 25th. They regroup and make a more deterined effort the next day. Aided by some inept Red Army bridge guards the Germans succeed and they establish a bridgehead. On the 27th they must endure some minor counter-attacks.

The force structure is small enough for a great solitaire game and introduction to the game system. System basics are an I-Go U-Go system with units being able to conduct overruns and engage in combat. Unit strengths vary as a result of what supporting arms you stack with the battalion sized units. Main combat units are infantry, artillery, and armor battalions. Supporting arms such as recon, anti-tank, anti-aircraft, military intelligence, and engineers are built as companies. Players are able to provide Close Air Support to aid the ground pounders and leaders like General Model even play a part in providing your troops with their best chance of success.