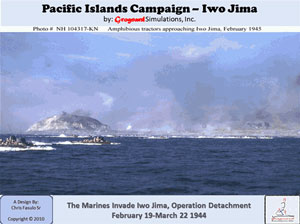 The Battle for Iwo Jima:

Pacific Islands Campaign (PIC) - Iwo Jima is our third offering of the campaign in the Pacific War. The game is a blend of operational/tactical level combat and maneuver during the retaking of the island of Iwo Jima from the Japanese during the Second World War. The game is played in turns, each one divided into phases for amphibious landing, maneuver, and combat. The game system uses many of the seven Battlefield Operating Systems (BOS) to simulate actual combat and maneuver that both the US and Japanese players must use to fight the battle. Of the seven BOS's, this simulation concentrates on Maneuver, Fire Support, Mobility and Survivability, Air Defense, and Command and Control. The Japanese defenses are sophisticated and well manned with fanatical soldiers willing to die for their emperor. This battle is the most expensive in terms of US casualties for the amount of time spent in combat (32 days) and the area taken (6 square kilometers). The fight is bloody and sharp. Victory in the game is measured against the time and casualties it took the US forces to actually accomplish the same mission. The marines had to take the island as an important stopping point for B29's from Saipan and Tinian. They lost 26,000 of their number in the assault and saved 24,000 airmen from likely deaths by not having the island to land on in emergencies. The game features US Marine Corps, US Navy, and Imperial Japanese forces at the Battalion, Company, and Platoon level. Units are initially setup as Battalions and Companies, and can be broken down into their respective elements. The combat system utilizes a set of combat multipliers that players must use correctly to have the best effect. The Japanese player has the ability to conduct Banzai attacks at night and these cause considerable damage as the US player cannot fall back in front of these attacks and must take casualties. The scale for this game is modified due to the smallness of the island. Each hex is 330 meters. Stacking has also been changed accordingly. The are a number of scenarios that simulate Operation DETACHMENT (complete battle), Raise the Flag (battle for Mt Surbachi), and others. There will be some options that can be used to even play between players and make the fight more interesting. These include additional Japanese forces that could have been there if they were not sunk by US submarines, and the committment of the 3rd Marine Regiment that was withheld as a Corps Reserve.