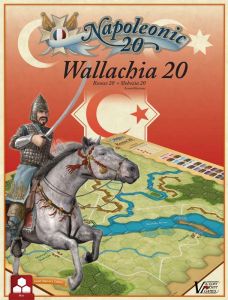 Rousse 20 simulates the earlier of these two engagements, fought on 22 June, 1811. In this battle Ottoman forces advanced northwards, towards the present day Bulgarian-Romanian frontier. Russian infantry and cannons were able to stall the polyglot Ottoman army, and although they managed to eke out a marginal victory their commander, General Kutuzov, chose to yield the key town of Rousse to the Ottomans, convincing them they had won a great victory. The Czar was not pleased.

Slobozia 20 focuses on the latter battle of 2 October 1811. In this engagement Kutuzov conducted a surprise march which cut off and surrounded the bulk of the Ottoman army, trapping it on the northern (Bulgarian) shore of the Danube. The result was a decisive Russian victory that permitted negotiations to end the war. This had the dual advantage of allowing Russia to transfer key reserves to oppose Napoleon’s invasion of Russia in 1812, and also prevented Austria from contributing more forces to support the French invasion.

Introduced to the Napoleonic 20 series are the Ottoman Turks, whose army is vast collection of irregular and unreliable troops, supplemented by a few Janissary regulars. Slobozia 20 also features this series' first naval unit, a Russian gunboat flotilla on the Danube River. As a bonus, Wallachia 20 includes a campaign game, where players first fight the Battle of Rousse and its results affect the situation in the second game at the Battle of Slobozia.

Solitaire Suitability: 8 on a 9 scale