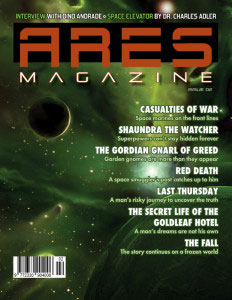 Jonathan Balog's The Secret Life of the Goldleaf Hotel

And the next installment of Kenneth Steven's, The Fall

The science behind the construction and utility of space elevators, and why they are so much better than space escalators.

Issue #2 will include CFS Quicksilver, a two-player game that takes place onboard a frigate-class starship in the not-too-distant future. One player controls the actions of the human crew while the other controls an alien infestation. The object behind the design is to create a high-tension (scary) game to play.