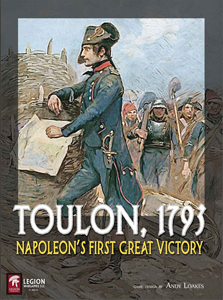 Toulon, 1793 is an operational level wargame for two to seven players, covering the siege of Toulon, in the South of France, between 25 August and 21 December, 1793. It’s area based system covers the entire campaign from the initial landing by Anglo-Spanish forces (at the invitation of the rebel Toulonnaise) through to their evacuation of the town as their ships came under threat from the batteries of the previously unknown Napoleon Bonaparte.

Operation points are at the heart of the system and combined with an innovative combat, loss and movement system generate a vast number of decision points for the players. Chrome comes in the form of spies, gendarmes, multi-national forces (and associated cooperation issues), reconnaissance, variable reinforcements and much more. The game map covers an area from Ollioules in the West to Sollies in the East and from Mount Farron in the North to Cap Cepet in the South.

The game is played in seventeen weekly turns and units range from detatchments to regiments (with battalions and companies dominating the counter mix).