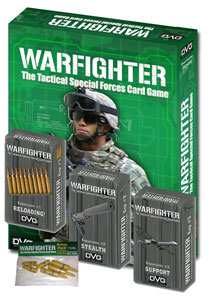 This combo pack includes the core Warfighter game along with all 4 of its Expansions!

Each of the first 3 Expansions include: 60 cards, 2 Plastic Soldiers, and a set of 4 Bullet Dice!

This expansion gives you more stuff. New Soldiers. New Weapons. New Equipment. New Locations. New Hostiles. You get new stuff and more of everything from the core game.

This expands the quiet and sneaky part of warfare. The core game does have stealth elements, but this expansion really fills it out.

The Support expansion enlarges the vital role distant forces play in your mission. This includes fire support, such as mortars, intel from UAVs, and precise fire from Snipers.

These dice were custom designed by DVG for Warfighter, but they can be used for any game!