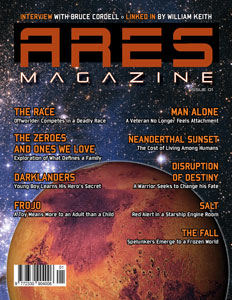 Issue 1 of Ares Magazine complete with War of the Worlds board game. Issue 1 Contents:

The Zeroes and Ones we Love, by Samuel Marzioli

Disruption of Destiny, by Gerri Leen

The Race, by John Buentello and Lawrence Buentello

Linked In, by William H. Keith

Issue Game: War of the Worlds

War of the Worlds is a new game from Bill Banks and is scheduled to print as the in-magazine game for the premier issue of Ares Magazine.

War of the Worlds is a two-player game of the conquest of Earth and the survival of humanity! The military forces of Queen Victoria gather to repel an attack by the diabolical Martian forces under the command of the evil Martian overlord.

The humans rely on conventional infantry, cavalry, and artillery, and perhaps a hero, for their main defense. Fortunately, the human player may get assistance from a mad scientist who can field an Infernal Machine that the Martians won't find amusing.

The Martians have a choice of five different victory conditions. Part of the challenge for the human player is to determine the Martian overlord's true objectives so they can be best thwarted.