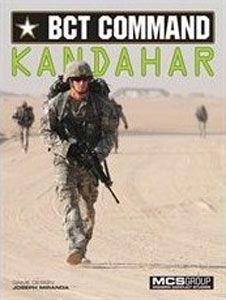 BCT (Brigade Combat Team) COMMAND: Kandahar is an operational level wargame of operations in Afghanistan during the current War on Terror. One player takes the role of a Coalition Force commander; the other the role of an Insurgent Force commander. Each player must accomplish objectives within a particular region, using a range of regular and irregular forces.

Player decisions reflect actual Task Force Group level command via a Military Staff System. Each turn, players allocate operational capabilities, represented by Joint Operations Cards. How well a player conducts his joint operations often determines the outcome of battles. But combat is not simply attrition of enemy forces. It also includes the effects of both military and political operations, as well as intelligence play. Consequently, players must think along several fronts of modern conflict.

A critical note: BCT Command: Kandahar uses many procedures similar to those currently utilized by U.S. and other Coalition forces. However, a number of abstractions were made to provide a playable game in a reasonable format.

Objective Cards are a quantification of political determination as well as the goals for which players are fighting. A player can use Objective Cards to guide their game strategy as well as to gain certain advantages. Much of the game is in determining the enemy Objective, and then taking appropriate counteraction. Often, your Objectives will conflict with your military operations, and it is up to you, the player, to determine the advantages or disadvantages of certain courses of action.