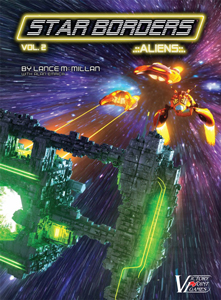 Star Borders: Aliens from designer Lance McMillan and developer Alan Emrich is a complete, two-player stand-alone game that introduces two new factions, the Rhame Swarm (a.k.a., the “Bugs”) and the C1B0R6 Collective (a.k.a., the “Bots”) that are fighting to establish control of a contested region of the galaxy in the Star Borders universe.

This game is completely mate-able with Star Borders: Humanity and introduces a few new wrinkles to the universe, including the first three-engine ships, ships that morph, and other strange goodies. Of course, there are new maps, counters, and compatible cards that can be retrofitted to Humanity so the design-your-own-scenarios possibilities have been increased exponentially.

Star Borders: Aliens features seven new scenarios exploring the very unexpected war between the Bugs and the Bots, and the inclusion of a bonus scenario to allow players to bring in the forces from Humanity. The tension between the asymmetrical abilities of these fleets creates a great player tension on the board that you will long enjoy!

• One sheet of double-sided counters