Won by the Sword 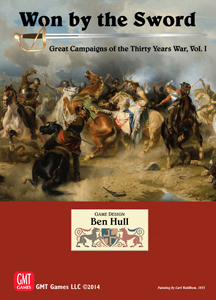 Great Campaigns of the Thirty Years War (GCo30YW) is a two-player game of operational warfare in the 17th Century. Armies maneuver on a point to point map of Southern Germany based on the road network available at the time. Each game is centered around a major battle or full campaign season. A Turn is a month divided into a variable number of impulses. Each army has a hand of Campaign Cards that control the amount of activity it may perform, the supplies it must expend, and a special action. Each impulse features one card play per army. Forces are concealed off map so players are faced with limited knowledge of the enemy. The major activities are maneuver, foraging, besieging fortifications, and an occasional battle. GCo30YW is a low-complexity game with emphasis on the players maneuvering their forces, but many decisions await. The low rules complexity allows each player, rather than being encumbered with rules, to focus on choices regarding how to manage his campaign.