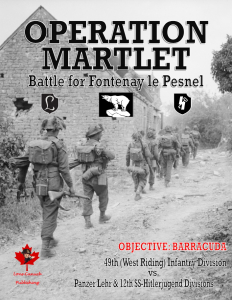 June 1944: On the right flank of Operation EPSOM, the British set up Operation MARTLET. This operation was necessary because EPSOM was vulnerable to German counterattack from the high ground in the Rauray area. It was essential for the Allies to seize several key points prior to the launching of EPSOM. These key points were the villages of Rauray, Fontenay-le-Pesnel, Tessel, Brettevillette, and Juvigny.

The 49th (West Riding) Infantry Division, consisting of the 70th, 146th and 147th Infantry Brigades, as well as the 8th Armoured Brigade, was assigned to carry out MARTLET. The operation’s first objective was BARRACUDA, the road between Juvigny and Fontenay. The German forces in this sector consisted of the Panzer Lehr Division and the 12.SS-Panzer-division Hitlerjugend (Hilter Youth).

Objective: BARRACUDA offers two ways of experiencing the battle. Players can sample a portion of the fighting by playing one of eight standalone scenarios. Scenarios FLP1-FLP8 also serve to familiarize players with the battlefield and the opposing forces. Players who enjoy a strategic aspect are encouraged to experience the entire battle by playing the Tactical Mission (TM). The TM is comprised of five inter-connected scenarios that begin the morning (0900 hours) of 25 June and continue over the course of four additional time periods: 1100, 1300, 1600, and 2100 hours. The TM lends itself well to team play.