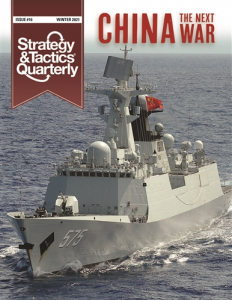 China – The Next War: China has been expanding its reach economically, politically, and militarily. The US remains its chief adversary on every level, but what strategies will be most effective in containing the burgeoning superpower? China’s long history gives it a wealth of political-military principles to direct its likely moves; the failure to understand them could doom its opposition. This is an examination of the potential for war, and of its disparate battlefields in the air, on land, at and under the sea, in space, and in the digital world.