From Salerno To Rome 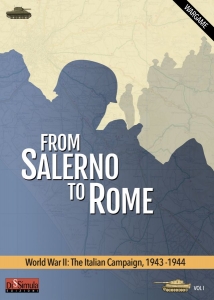 he game allows you to simulate the first ten months of the military campaign in Italy during WW2, from the landing in Salerno (September ’43) to the liberation of Rome (June ’44). The game starts with the American 5th army that has just landed in Salerno and the British 8th army advancing in Apulia, while the Axis powers gather their forces to hit with a powerful counter-offensive one of the two allied armies…

The game enables you to fight the battles that took place in Italy from September ’43 to May ’44: Salerno, Cassino, Anzio, Ortona…

Each unit shows the historical symbol of the division it belongs to. In addition to that, all types of tank that took part in the campaign (Sherman, Churchill, Panzer IV, Panther, Tiger etc.) are represented with the most common colors and camouflage patterns.

Aircraft counters also are all unique and different from one another.

WHAT'S IN THE BOX

There is one for each player; their purpose is to keep track of points and of all the different formations that are activated. All armies are represented. There are several boxes available for the HQ counters of each formation in the game. .

The game lasts 10 turns, each representing one month. Each turn is divided in a varying number of impulses, during which both players always have the opportunity to react to their opponent’s moves, alternating within an extremely flexible game structure.

When a turn starts, each player gets a certain amount of activation points he can use to put under command his forces during impulses. These formations, single divisions or whole army corps, once activated, can move and fight, move strategically in a different sector, can be put in reserve and so on.

Artillery has a very important role in the game; it can perform various missions: bombardment, interdiction, tactical support. Aircraft perform the same kind of missions too, but with a much longer range.

The activation point system creates great uncertainty in the game, so every game plays out differently: players must carefully plan their strategy and constantly make fundamental decisions. It is a game of great tension and depth, where desperate counter-attacks alternate with strategic surprises; the attention of players must always be constant.

The German player has obviously a chance to win the game right away if he manages to repel the US 5th Army in Salerno.

If the German player does not win, the game goes on, and the Allies must conquer Rome, trying to eliminate the armies of the Axis powers, in order to win. The Axis wins if the Allies do not reach their victory conditions or if, in any moment, the losses for the Allies go over a certain level. 'The Kesserling’s Option' variant changes the game completely, giving back the initiative to the Axis player and changing the victory conditions again.

Salerno - The landing of the 5th Army.

Ortona - The shortest scenario of all; the 8th Army crosses the Sangro river and engages a fight at Ortona, defended by the Green Devils of the German 1st parachute division.

Anzio e Cassino - The Shingle Operation and the bloody battles of Cassino.

Diadem - The breakthrough of the Gustav line and the German entry into Rome.

The Kesselring’s Option: Foggia Counterattack - A hypothetical scenario, yet absolutely plausible: The 2nd SS Panzerkorps counterattacks in an attempt to reconquer Foggia and its precious airports.

The Campaign Game - The whole campaign, from the landing in Salerno to the conquest of Rome. The longest game!