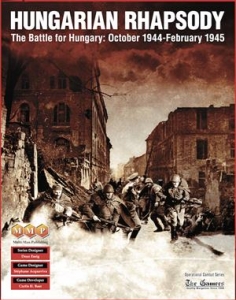 Hungarian Rhapsody (HR) is an Operational Combat Series (OCS) game that depicts the Soviet 1944 drive into Hungary which led to the battle of Debrecen, the siege of Budapest, and the German 1945 KONRAD counter-offensives attempting to relieve Budapest.

Romania’s defection in August 1944 allowed the Soviets to outflank well-defended Axis positions in the Carpathian Mountains from the south. In the process, the German 6th Army was almost destroyed, losing most of its heavy equipment (which explains the relative weakness of the German artillery at the start of the campaign).

The game begins on the October 5, 1944 turn with the 2nd and 4th Ukrainian Fronts launching an offensive to isolate the German 8th Army which is still defending an area off-map to the east in the Carpathian Mountains. It allows players to play the two major Soviet offensives and several smaller scenarios covering the German counter-offensives, concluding on February 26, 1945.

The Soviet offensive power comes from three tank corps, five mechanized corps, and three cavalry corps—but faces formidable challenges. They are operating at the very edge of their logistical capabilities. While the Hungarian Plain is good tank country, Budapest and the surrounding terrain make for heavy going. And the Axis forces are capable of stinging counterattacks (such as the Battle of Debrecen) and all-out counter-offensives (such as Operation KONRAD). The Germans had 13 panzer divisions, three panzergrenadier divisions, two cavalry divisions, and two cavalry brigades present in this theater. The total seems large, but not all were present at the same point in the campaign.

Hungarian Rhapsody is a medium-sized two-map OCS game, with 5-mile hexes and 3.5-day turns. The full Campaign game is 43 turns long, and there are five campaign scenarios so players can start at any point of the action.

Special rules in this 18th OCS series game are carefully researched to model key aspects of this important campaign:

• Tank-buster aircraft such as those piloted by famed German ace Hans-Ulrich Rudel.

• Forces include German Wehrmacht, Luftwaffe and SS formations, as well as Soviet Guards and regular units, plus Slovakian Partisans, Romanians, and Yugoslavians fighting for the Soviets.

• The Battle of Debrecen, one map, 7 Turns