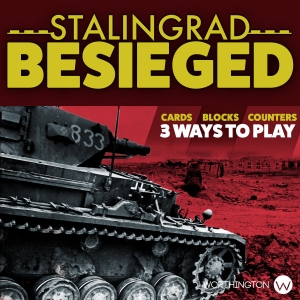 STALINGRAD BESIEGED is a game that allows 1 to 2 gamers to refight the campaign for Stalingrad in 1942, IN THREE DIFFERENT WAYS; CARDS, BLOCKS, OR COUNTERS. The game plays in 1 hour or less.

The game depicts the battle in the city of Stalingrad itself. This is a street fighter's game, just like the campaign. Intense block to block battles defined the Stalingrad siege and the game reflects this within its design. The game board uses a German map from 1942, with grids defining key locations in the city. The grids are used for movement and combat in the game. Combat is frequent and each side battles back and forth regardless of who moves.

Because of the dynamics of tanks, artillery, and infantry and the variability of the Russian ferry points and the arrival of reinforcements, no two games will play the same. This adds to a great replay value, and to the solitaire play value as well. PLUS, it comes with and allows players to play with the components of their choice; CARDS, LARGE WOODEN BLOCKS, OR OVERSIZED COUNTERS.

The Battle of Stalingrad was one of the most important battles of World War II. The Axis failed to secure the ferry ports in Stalingrad (cutting off reinforcements) soon enough to prevent the Soviet counterattack that caved in the Axis flanks far from Stalingrad, and ultimately surrounded and captured Stalingrad and the 6th Army. Thereafter, Germany was on the defensive in the war as a whole. This game focuses on action in and around Stalingrad; the Axis must succeed in time to reinforce their flanks against the Soviet November offensive.

At the end of the game, if one player controls both Ferry Points, he/she wins. If each player has one, then if the Tank Factory is still intact, Russians win; if it is destroyed, Germans win.

There are 40 units; 16 German and 24 Russian. You get a complete set of units for each component type (cards, blocks, and counters). The numbers reflect many factors; for example, while the Russians may have had better medium tanks at this time, their crews were less well-trained.

Each unit has a designator (for example. German Infantry, Tanks, Anti-Tank Weapons, Artillery, etc ). At the top of the unit is an attack number on the left, a defense number in the center, and a movement capability number on the right, as illustrated.