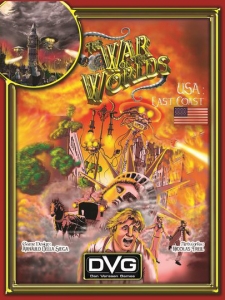 The US fielded a small military force at the time. This results in them having fewer Units at the start of the game. However, as seen a few decades earlier during the Civil War, the US is able to rapidly ramp up their production capabilities and quickly expand the size of their army. As the game unfolds, the US receives production bonuses to reflect this. The geographical area represented by the US map is larger than in the other games, as such, each Martian Wave is made up of 5 Tripods, and they tend to move a little less often. To match this, the US must pay 3 PP to move Units during the Production step. The US game gives a more lumbering feel with large forces bashing against each other.