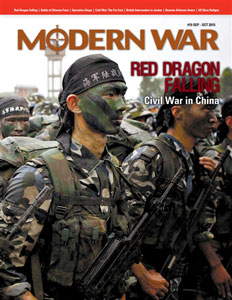 It was the Chinese scholar-historian Wei Yuan, writing in the mid-19th century, who first formally identified his nation’s apparently inescapable cycles of “chaos and humiliation” (quru), followed by “rejuvenation” (fuxiang), followed by “wealth and power” (fuqiang), and then back to quru to start again. More recently, Queens College futurist and sometimes-CIA analyst Dr. Bruce Bueno de Mosquita wrote concerning China that he sees no factors in the present-day environment working to end or deflect that same cycle. It was the shared conclusions of those two men, working over a century-and-a-half apart, which inspired me to design this wargame modeling the military parameters and possibilities inherent in the next phase of Chinese quru – civil war.

The likely starting points for such a conflict would either be the collapse of the Chinese real estate bubble – which is already broadly predicted to be inescapable and will constitute the largest financial collapse in world history – or the growing potable water crisis. (A third of the water consumed by the Chinese is undrinkable by US standards.) Beyond those factors, or in combination with them, there’s also the gender imbalance, the fossil fuel air pollution crisis, the increasingly endemic corruption, the aging population structure, the expanding rural-urban economic gap, as well as the general collapse of ideology and the resultant moral lapse throughout the populace. One, some, or all of these factors may eventually lead to a crisis in China, as so often occurs in history, resulting in a civil war.

Each turn equals two months, probably starting sometime late in this decade or early in the next. The game is designed for two players, but it is adaptable for solitaire. Each hexagon on the 34x22” map represents 80 miles from side to opposite side. Units of maneuver are brigades, divisions and group armies and air corps (in the form of 176 large-size NATO-style counters).